With school finished for the term, we packed our bags and headed back to Australia for three weeks.

The kids were so excited, they had been counting down for weeks and today was the day. We didn't have to leave for the airport until 10.30 in the evening, with the flight leaving at 1.00am.....it was going to be along day.

When they asked for the third time, "when are we leaving" I figured we had to get out of the house and head to the beach for the day, or they would drive me batty. So we ended up at the Mount Lavinia Hotel. I was just as bad as the kids, for the first time in history I had the bags packed and ready to go, I'm usually a "performs best under pressure kind of person" leaving things until the last minute and then swirling around like a tornado, throwing things into the suitcase on each pass.

Mount Lavinia Hotel was built in 1806 by the 2nd Governor of Ceylon Sir Thomas Maitland as his country residence. Seems young Thomas was a bit of a player and fell in love with a local dancer called Lavinia. Legend has it, that the secret tunnel used to smuggle Lavinia into the Governor's mansion is still there, ...  now I'm thinking that would be a great tourist attraction, but there are no signs pointing" This way ",of course as all good stories go, their love was doomed, Lavinia was a native girl and this would never have been sanctioned by British Aristocracy, and alas Sir Thomas had to return to England suffering from ill health so he left poor Lavinia behind, but not before renaming the village where he had built his bungalow to Mount Lavinia. So what we are left with is an English mansion, built on a rocky outcrop that has been added onto over the years. Finally growing into the magnificent Hotel that it is today and in all that time, not losing any of it's English charm..think Raffles by the beach.

When you drive through the gates of the Hotel into the cobbled paved courtyard, the first thing to greet you is the doorman, resplendent in full colonial costume including a traditional Pith helmet. As magnificent as he looks, the English were never ones for practicality. A little thing, such as living in the sweltering tropics shouldn't change the dress code.  In fact they have a lot to answer for. At least they have reneged partway and put him in shorts.

To this day, practically no males here actually wear shorts, that's reserved for small children and tourists. Even walking along the beach you see families where the father is in a business shirt and long trousers. The only concession he has made to his beach attire, is wearing thongs  ( flip flops ) on his feet. Every day when my 13 year old son comes home from school, I look at the hair plastered to his face from sweat, wearing  long denim trousers that is his uniform and think WHY.  Australia is a hot country, we started with English traditions but eventually someone said enough is enough, its too hot, lets be practical here, so dress shorts were introduced for all.

When we go out David is always dressed in shorts and sandals, while all our friends are wearing long trousers and lace up shoes. One day we had to go to the Immigration Department and a friend said he would take us but he had to go home and change first...We both thought he was kidding. I know its a sign of respect to dress neatly, but as long as the shorts aren't hanging halfway down your butt and you don't have some picture on your shirt that would make your mother
blush I think its about time "Neat Casual" started to make an appearance in Colombo

The other day I saw two policemen on bicycles, riding around looking incredibly uncomfortable. In Australia they are given racing bikes and kitted out in shorts, shirts and sneakers with matching bike helmets marked police. In Sri Lanka they are riding around on heavy metal clunkers, the type we had when we were kids, before carbon frames were introduced, They are  dressed in full khaki police uniform, long trouser's, polished black leather shoes and their regular police hats. Lets be serious here, they don't actually look ready to apprehend some mastermind criminal. They just look hot and a little silly


We paid our 2000 rupees (about $15) to use the Hotel facilities, we didn't bother with the buffet today, its just too much food. Each time you tell yourself you're only going to have a little, but how can you stop. When there's Rice, String-hoppers  Kottu Rotti, every type of curry you can imagine and you haven't even looked at the desserts yet, it's just overload

We just ordered  from the snack menu. You can lounge around the pool area all day listening to the Sunday Jazz band or wander down to the private beach and get tossed in the waves. The beach is fantastic, beginning to get a little rough now as the monsoon season is approaching this side of the island.... that's OK though, because you can always pack up and  go for the weekend to the east side, where the monsoons are just finishing.

The East was devastated by the Tsunami in 2004, but now they have re- built all the resorts better than they were before. It can be anything from a 3 to 7 hour drive depending on which beach you are going to on the East Coast, however last week they opened a new international airport in Hambantota, home of the President. So now you can be there in 30 min,

Seems since it opened though, the major airlines have refused to fly there as its not financially viable.  So Sri Lankan Airlines have already started offering weekend packages consisting of flights, meals, accommodation and a safari for $90 to entice people on to their planes.

So with millions spent on new airports that only tourists use,and  fabulous resorts popping up all over the place, they are bound to get around to constructing those new hospitals  and  basic toilet facilities in schools very soon....


After wearing ourselves out in the waves, we wandered back to the pool. I had to ring David and tell him how beautiful it was, I was chatting away on the phone soaking up the sun while I watched some guy walk up to the stage and start singing.....Oh my goodness I know him!! David you'll never guess who is singing. It was none other than Conrad De Silva, famous in Sri Lankan circles in Melbourne for once headlining most of the dances there. He's son Andrew recently won Australia's Got Talent. 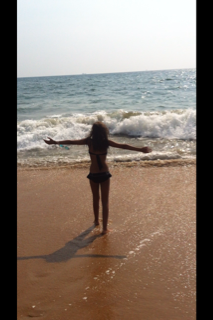 So with the hours now passing and a sudden tropical downpour ending our beach day, it was home for the final countdown. House was clean, bags were packed and kids were scrubbed.

The driver and groundsman were given their months wages, with the driver receiving a bonus for the Sinhalese New Year which was taking place in two weeks. This was the hard part, I'd  had to consult local friends as to what the correct thing to do was. Our driver was Buddhist, so he was glad to be able to return home while we were gone, and spend this special time with his family.I was told it is traditional to give him an extra months wage as a bonus.  Like we give bonuses at Christmas. Our groundsman however was catholic, so he did not celebrate the New Year at all....so no bonus for him, his would come in December.......I felt bad for him, so I slipped him an extra 1000 anyway. ($8)

We left for the airport an hour early, we couldn't stand waiting around any longer. It had been a long day, so once we checked in we went straight to the lounge and all promptly fell asleep. Nothing like a day at the beach to wear you out. I woke up because it was cold...the first time I had been cold in months, someone had really cranked up the air-conditioning. I had been praying when we got back to Australia it would have cooled down, they were going through a heatwave over there. Mum had told me a few days before they had had 10 consecutive days over 30,..... HUH!! MUM WE HAVE HAD 90 CONSECUTIVE DAYS OVER 30!!!!

The lounge was very quiet, there were only two other people, then I realised they were not calling the flights. I looked at my phone 12.57am....GET UP!!!, GET UP !!! WE'RE GOING TO MISS THE PLANE!!!!SHIT SHIT SHIT!!! The plane was leaving in three minutes. I grabbed our carry on bags and sprinted to the door, Romesh was by my side but no Lara, I looked back and she was casually searching under her chair for her book with not a care in the world. LETS GO, LETS GO, I'VE GOT IT, I screamed, waving my hands in the air. By now I didn't care how loud I was, I wasn't going to miss that plane. I realised then it wasn't just the children.I was really homesick too, I just hadn't realised how much.

I ran through the terminal, two children trailing behind....it's every man for himself!  To their credit they kept up with their old mum and I pushed them through security, we bolted down the gangplank just as  the last remaining passenger disappeared around the corner.......Ahh! Good Ole Sri Lanka,as usual they were running late again. We plonked ourselves into our seats, just looked at each other, then burst out laughing, we had waited so long and almost never made it. Only I could fall asleep at such an important time, once again I had left it until the last minute.

Posted by Catherine Cruse at 11:21 PM

Email ThisBlogThis!Share to TwitterShare to FacebookShare to Pinterest
Location: Asia