Tea Be or Not Tea Be

After spending the school holidays in Melbourne we arrived back in Colombo on the weekend of the Sinhala and Tamil New Year.  Our Driver, like just about everyone else, had returned to his family up country and wasn't due back for another few days. The streets were deserted and all the shops were closed. The domestics were all home and nearly everyone else was at one  of the resorts along the coast, most of these were booked out.

I decided to take the children to Cinnamon Lakeside, one of the 5 star hotels in the city for the day, to swim and get something to eat. The city Hotels were practically the only places open and even then, there was only another half a dozen tourists lounging around. The New Year meant nothing to them. I felt sorry for the staff who had to stay behind and work, I almost felt guilty being there. For most of our 27 years at the pub David and I worked nearly every Christmas and New Year so I know what its like to have to work while everyone else is with their family.

We were in bed early that night, when I was woken with an almighty bang that sounded like a gunshot. When a country has been at war for 3 decades, even though it finished 4 years ago, that kind of noise is very unnerving. Then  there was another and another. I had visions of some sort of uprising, yeah.... we're going to be on the news...Australian family caught in gun battle.... and great,we are located just behind the construction site that will eventually house the new headquarters for all three of the armed forces, Navy, Army and Air force. I see the guards standing there with their semi automatic weapons slung over their shoulders looking thoroughly bored every time I walk past.

After gingerly creeping to the window, it was  like, "Ok take it down a notch, false alarm kids, go back to sleep", just the neighbours  lighting fire crackers one at a time and throwing them in the air. 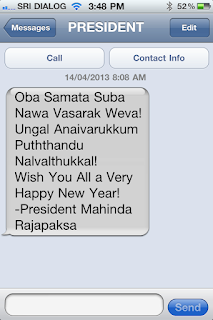 The Buddhist people here rely heavily on astrology to map their lives. The auspicious time to celebrate New Year was at 4.07am.  So people stayed up all night and at the correct time they would light crackers and serve Kiri Butth ( Milk Rice)  to celebrate the New Year. Even in Australia on our traditional New Year, January 1st we would always go to David's Aunts house to eat Kiri Butth. So starting at 4.07am and continuing throughout the rest of the weekend there was the continuous sound of crackers as they welcomed in the New Year.

The following morning as I was having my cup of tea, I, along with every other mobile user in the country received a text from the President of Sri Lanka Mahinda Rajapakse, wishing me a Happy New Year....way to win votes!!

I remember the whining going on at home when our Government sent all mobile users a text message, warning of the imminent high fire danger that summer. The opposition complained about the unnecessary cost.....no such complaints here.
I actually rang the number back just to see who would answer, of course I got a recording saying the Dialog phone was currently switched off...the switchboard was probably in meltdown with 20 million  people who had the same idea.
.
Most of the Government Offices resumed work on the Wednesday. We heard on the radio  that the auspicious time to leave the house and travel to work on this day was 7.42 am. The kids and I had to laugh. Sri Lankans are notorious for being late. There was no way I thought, that at exactly 7.42 am millions of people would be opening their front doors at the same time and leaving for work.

Even sometimes when we go to a hotel here, you will see four or five weddings going on at once because the astrologers have picked the auspicious time to wed. We actually have a wedding to attend in June, on a Thursday night. The invitation says the wedding will commence at 6.57pm. On the positive side if you weren't Buddhist you wouldn't have to wait weeks to book a venue on a  Saturday evening.

The kids settled back into school quickly after the break. On the 1st of May, workers converged onto the streets of Colombo to celebrate May Day, there were rallies everywhere. It seemed only fitting that after an extraordinary number of delays the Hotel had finally wound up on this particular day,  it was no longer ours. We were officially unemployed, no need for us to champion the 8 hour working day.

David crossed the Indian Ocean for the 5th time in 5 months, he was making more crossings than the people smuggler's, and finally joined us full time. He was here for two days before he'd had enough of the heat, we had by now acclimatised and told him to stop sooking.  However on the weekend we packed a bag, dragged the kids out of bed at 6.00am and took off for the cool climate of the hill country.

Nuwara Eliya is renowned for it's tea estates, fresh produce, great strawberries and flowers. The English spent  every March and April here to escape the hottest months in Colombo, building a golf course,race track and tudor style hotels which still operate today. We were headed for the Heritance Tea Factory Hotel. An old tea factory that has been converted into a luxury hotel. A 5 hour drive to officially the highest hotel in Sri Lanka. We actually packed a jacket and a beanie.
The drive is stunning, photo's can't capture the true beauty. When you have an 11 and 13 year look up and comment on the scenery instead of having their nose buried in a computer, you know you have struck gold.
The outlook  changes from choking city, to bustling villages, tropical jungle to endless mountain ranges all in the space of a few hours. The coconut palms give way to rubber plantations which are pushed aside by mountains with cascading waterfalls. The higher you climb, the fresher the air becomes, the more winding the roads are. Every driver believes they alone have the need to be in front, so you often see kamikazi bus drivers overtaking  trucks on blind corners. Mountain on one side, precipitous drop on the other.You hold your breath the first few times you witness the madness, but after an hour or so you no longer notice, it's just the way it is.

Climbing the final hills into Nuwara Eliya you find young children standing on the side of the road, waving  flowers madly above their head trying to make a sale. We noticed the same child kept appearing. Each time we passed, he would scramble up the face of the hill on  a slippery track and be waiting for us at the next bend, while we wound our way around the road. After the fifth time we told the driver to pull over, the poor little  bugger was so out of breath and by now the flowers were looking a little worse for wear, we gave him a few hundred rupees for perseverance and told him to keep the flowers. The next day going home he got us again, this time he was running down hill, we finally bought the flowers, only to come across his sister further down the hill running her own race.

A drive through  Nuwara Eliya is a drive through a 19th century English village. The palm trees have been replaced with huge oak trees and English cottage gardens. The old post office and courthouse are still there as well as the traditional pub on the corner, although I  think last drinks were called  years ago. The town centres around the  park, complete with childrens playground and walking trails leading down to the lake, where you can take to the water in paddle boats. The one item that stood out the most was the flowers, they were everywhere. Colombo is so tropical and, well ......just green. It's too hot for flowers. In Nuwara Eliya there is colour everywhere.

Tea is one of Sri Lanka's major exports. The hills in this region roll on for ever, with every available space covered in tea plantations. It's something out of a Dilmah commercial to look up and see the tea pluckers dotted amongst the rows of bushes with baskets on their heads.

There's actually been quite a bit in the media here, with the tea pluckers striking for better wages. They are vying for an increase to a minimum 15,000 rupees a month  ($115.00) and better living conditions. This is still a pitiful amount of money considering the amount of work they are required to undertake.

The Estates have operated with manual labour for the past 100 years. The workers are traditionally Tamil people brought over from India by the English last century, to work the Estates. The terrain is too inhospitable  for machines and the leaves to delicate. The workers, predominantly women are required to pluck just the youngest foliage...two leaves and a bud with the twist of a hand. It's painstaking tedious work on rough uneven terrain in the heat, cold or rain. If they don't fill their quota of 25 kilo a day they are deemed  not to have completed a full days work, therefore only receiving 75% of their wage.... made my tea a little bitter when I thought about that the next morning.

Each year the Estate owners are finding it  harder to keep their workforce. Previously if your parent was a tea plucker, you were a tea plucker. You had only the minimum education before having to  leave school and help support the family. Now the younger generation are becoming more savvy and realise by moving to the cities they can find work in construction that is easier and better paid. 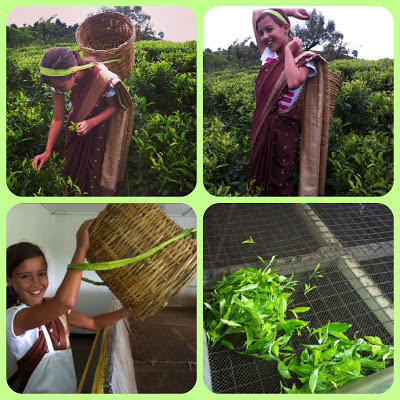 
The Tea Factory Hotel gave you the opportunity to be a pseudo tea plucker, they dressed Lara and I in sari's, popped a basket on our head and led us out to the bushes. Ten minutes and we were done, after plucking a hand full of leaves we threw them over our head into the basket and promptly missed, with the fruits of our labour falling to the ground. Our guide tried to hide his smile. We broke into fits of laughter, what a disgrace to these ladies we were. After picking them off the ground we took them into the factory for a demonstration on how they finally end up in a cup.

The rooms we slept in were once the drying rooms for the tea leaves. The Hotel foyer was built around the massive generator used to power the industrial sized fan for drying, they turned this on every night at 7.00pm as a display. The staff dressed with the traditional headgear of the Tamil's. The whole experience was such a contrast to life in Colombo. Walking in the cool country air, high enough to reach out and touch the clouds as they swept past, sitting by a fire after dinner drinking tea and playing billiards in the lounge....so, so, English. 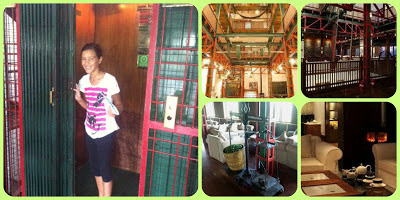 As we left the next day we stopped by the side of the road and bought fresh vegetables for dinner that night, and strawberries with a cup of dipping chocolate for the long drive home. It was back to the grind for the kids tomorrow, with school.

As we rounded the bend I caught a last glimpse of the tiny figures bent over from the weight of the baskets draped across their head, plucking leaves with gnarled bony fingers, deftly throwing them over their heads as though their lives depended on it...............
Posted by Catherine Cruse at 3:25 AM