TODAY IS A NEW DAY

Our new venture G'Day Lanka is up and running. Our first official tour was a combined under 17 cricket side from Ferntree Gully District and The Hellenic Cricket Federation in Australia. 15 kids, their parents and a few extras along for the ride. 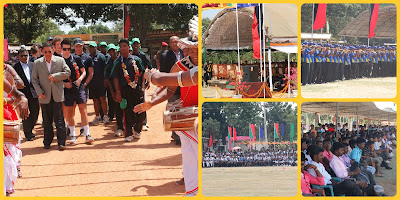 One of the matches was a T 20 match in Killinochchi. This match had been organised by Kushil Gunasekera and The Foundation of Goodness in partnership with Major General Udaya Perera and the Sri Lankan Army. We told the kids that this was a momentous occasion, this was the first foreign team to tour the North of Sri Lanka in over 30 years because of the civil war, a point that didn't really register with them until they got there. How do children who have grown up in a country like Australia, that is so far removed from the rest of the world understand the true concept of war and violence. To us its something you see on the evening news, to them its just a flash as they change the channel to watch the Simpsons.

Kilinochchi was the scene of one of the bloodiest battles in a 30 year conflict with no winners. A whole generation of children  have grown up knowing nothing but war and violence, then four years ago the LTTE were wiped out and the guns were silenced. War crimes were committed?? Who knows, isn't any war a crime ? Whatever the answers to the questions are, the war is over. People for the first time in 30 years can walk down the street without fear, children can go to school and finally young men can hold a bat in their hand and not a gun.

I have been travelling to Sri Lanka for 28 years, but never got further North than Sigiriya, so even I was looking out the window wondering what was coming. There was no sign along the way that a deadly conflict had ever been waged, the only sign that the country had even been at war was the one checkpoint we had to pass through on the outskirts of Kilinochchi. Our passport numbers had been faxed through days before with a list of names. The army continue to monitor civilians coming and going to ensure there are no remaining LTTE simmering in the background. In Colombo it is not unusual to see soldiers walking around carrying machine guns over their shoulders especially around Government Offices, but here in a former war zone there was nothing. The army have deliberately chosen to wear non combat uniforms and they carry no weapons, they greet the civilians in Tamil with their aim to be one of harmony and not authority.

Everywhere you look there is something happening. Convoys of dump trucks were lumbering along the newly paved road, filled with sand and cement for all the re building. The rail line from  Colombo to Jaffna is due to open in August, for the first time in decades truly joining the country together. Sporting grounds are being built so children can play as they were meant to, hearing the crack of a bat against ball and not the sounds of gunfire.

Last December I went to the Boxing Day test in Australia with my family. Sri Lanka had been given the honor that year. The last time we saw them play on Boxing Day was 1995.. a long time between overs. As we walked to the MCG we were confronted with demonstrators denouncing the Sri Lankan Government for war atrocities, demanding that sanctions be taken against sporting matches with Sri Lanka. Long haired hippies waving placards spouting rehearsed rhetoric, professional demonstrators who had probably never stepped foot outside Australia let alone traveled to war zones in Sri Lanka.  My mistake was to stop and read one of the placards,  instantly two protesters who were in the mood for a slinging match started with their verbal abuse because I dared to enjoy a great Australian tradition of watching cricket on Boxing Day....sport and politics usually don't fit, but today in Kilinochchi it was like a ball in Sanga's glove. 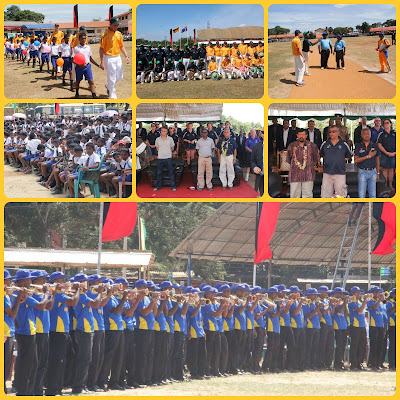 After being hosted for a silver service lunch at the Army headquarters in Kilinochchi, we boarded the bus to the ground for  what we thought would be a quiet afternoon of cricket. As the bus rounded the corner, 40 jaws dropped to the ground. We couldn't believe what was waiting for us. There were literally thousands of people patiently sitting around the ground waiting for The Australian Cricket Team, the fact that it was just an under 17 side didn't matter. These people had been cricket starved for so long they were willing to watch anything. Today was something special for them too, today was different from every other day.

The Army had spent weeks getting the ground ready for us, they had erected shelter for the spectators to sit under, entertainment for the crowd between overs. They had change rooms and dugouts for each team even lounge chairs and seating for the parents of  the visiting team in a VIP area. The Australian Team were given an official welcome as they walked around the ground, hundreds of  children were waving Australian flags, and the media were everywhere. It was a welcome fit for a National team not a bunch of kids from the outer suburbs of Melbourne. 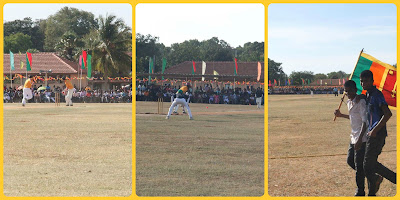 The match was played in the heat of the day, proving a little much for the young Aussie boys with a few of them becoming a little wobbly as the day progressed. The combined Northern side proved a lack of match practice was never going to stop them and they won the game convincingly.  During the day I walked around the ground, looking out, and not in, the result was inconsequential.  I wanted to see the people, trying to imagine what their lives had been like. Everyone that was here over the age of 4 had lived through the war. Now they were all  doing the most normal thing in the world...watching a game of cricket. The result was never going to matter, what today was about was giving a generation of people the opportunity to be like everyone else, to have the fundamental right to live without fear and it was an absolute privilege to be a part of. 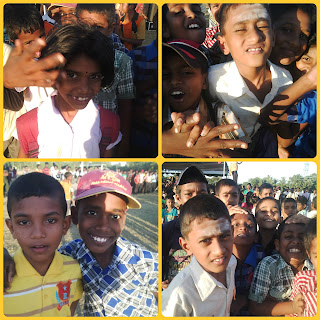 The Army had organised  entertainment for the children throughout the day.  I watched as they all ran up behind some poor soul dressed in a bear costume. It must have been like a sauna in there. As the pseudo bear turned around pretending to growl they all ran off squealing and laughing, only to come back for more. I sat there and contemplated the thought, that children are the same the world over, they just want to have fun, there is nothing more beautiful than the sound of a child's laughter, the pure innocence of it.  At least these children were too young to remember what their parents had lived through. I pulled out my phone and took some photos. Instantly I had dozens of small children surrounding me, kinda stole the bears thunder. They were  facinated to see their image frozen on my i phone, they had never seen a photo of themselves before. Such an ordinary thing for us was an utter source of amazement for them. 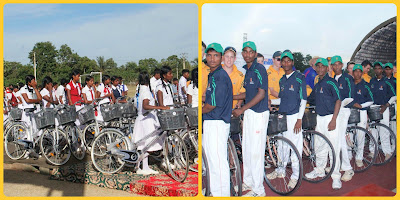 During the break 84 bikes were presented to school children from the local area courtesy of The Foundation of Goodness and Sangakarra's "bike for life" programme. The Aussie boys had also collected enough money to be able to present a bike to each of their opposing teammates at the conclusion of the match as well.

Trophies were presented and speeches were made. As we all got back on the bus and rolled out of town, we hoped the Aussie boys would reflect on what they had been a part of. Hopefully now the floodgates have opened and more people will make  the effort to travel North and embrace the people there.

The army have packed up the chairs and taken down the flags, the shelters have been dismantled and food stalls taken away, but left behind is a sporting ground and 100 children riding around on their brand new bikes. Maybe I don't know enough of what has really happened over the past decades, I only know what I have read and everyone has their own story, but  as a mother I know too many sons have been lost and too many husbands will never come home. The war has finished now and no one wants to go back. Maybe it's too simplistic to say, lets just move on...... but then sometimes the world would be a better place if it was a little more simple. 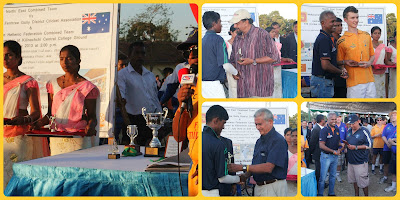 Posted by Catherine Cruse at 1:34 AM