Buddhism is the major Religion here in Sri Lanka,one of their philosophies is not to kill......here in lies the problem. We have a small rat dilemma. When I asked our driver who is a Buddhist to buy traps he wouldn't do it, he had a better idea." Madam I will make a nice box and catch the rat, then I will drive him a long way away so he can live in a new place"......Maybe I'll just buy the traps!

Now I grew up on a farm, I've lived with my share of Gods creatures. Bugs, spiders, even snakes not a problem, throw a mouse in there and I'm on top of a chair quicker than it takes chocolate to melt in the midday sun. Make that mouse a rat and we've got a real problem.

When I turned the light in the kitchen on and was confronted by the sight of a rat the other  night,  Ussain Bolt had nothing on me, not only did I run like a Jamaican, I thought I was a high jumper as well, leaping into the air just in case said rat tried to run up my leg.

Ananda our driver came to see what the commotion was about, when I told him there was a rat, his response........"No Madam, no rat go inside. I leave small piles of rice outside  every night  so rat will be full, then rat go back to the jungle, no rat go inside" he repeated. He was very pleased with his ingenious idea, standing there with a dopey grin on his face. I stood  staring blankly at him,stunned. I didn't say a word. In  my head I was yelling "Yeah, your fat rat buddy, is eating the rice  alright,  then he's going back to the jungle and telling all his rat mates to get over here, cause you're laying out a smorgasbord every night.!!..... I smiled and walked away. It was too hard to explain....

Buddhists celebrate Vesak on the full moon in May. Vesak is the day Buddha was born, died and reached enlightenment, kind of like our Christmas and Easter rolled into one. It is one of the biggest days of the year in the Buddhist calendar. Weeks before, they start putting up lanterns all over the city to get ready for the celebration, people clean their houses, the kids get new clothes and everyone discusses whose place they are going to have lunch at this year.

It proves it doesn't matter what country you live in, when it comes to celebrating your religion it all revolves around the family coming together. There was an air of excitement for weeks before, the only thing they didn't have was the relentless bombardment of advertisements on tv telling you little Johnny... or Romesh  in this case just had to have the latest playstation or X box at only $399.

Our Christmas carols are drowned out by the Ka Ching!! of the cash register with people maxing out credit cards to show their love. When January rolls around the love they bought lies broken on the floor or in the top of the cupboard. Once we grew up the magic was gone and everything just became a mad rush. We made our lists, checked them twice. Only 57 more shopping days left till Christmas and 42 more people to buy for.

Buddhists in Sri lanka have a novel idea......everything is free. Several days before Vesak,  dansalas were being put up everywhere. These are basically small marquis, or stalls, lining the sides of the roads. Some have large pandals, or bamboo frameworks hanging inside with pictures depicting Buddha's life. Families walk along, with the kids wide eyed, looking at the lights and moving parts. Colombo's version of the Myer window's. The other dansalas are giving out food, drinks, ice cream, tea or coffee. Everything is free. 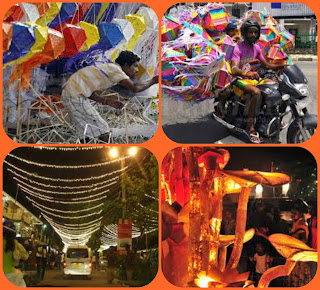 The local shopkeepers get together in each area and pool their resources. Along the main road  the army is giving out supplies to people wandering past, and then there are the big companies, banks and so on, who set up their own dansalas handing out fruit or vegetables or drinks. It starts in the morning and goes late into the night. There are designated major areas, one being in Butturamulla where we live, others scattered around Colombo 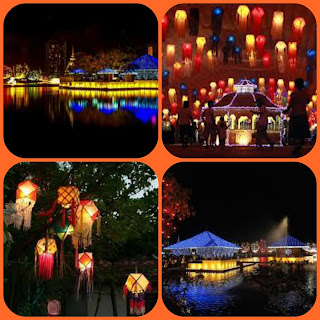 On Vesak night the entire city is lit up with lanterns of every size and colour. We decided to take friends who were visiting from Australia out for dinner on Vesak. The 25 minute trip into the city took nearly two hours. The roads were choked with traffic moving at a snails pace, everyone had their windows open enjoying the warm night air. Trucks crawled past with families crammed into the back, waving and smiling. Three wheelers wove in and out of the traffick with at least six people sitting on seats designed for two and families wandered along the sides of the roads, children hoisted onto shoulders for a better view. You could feel the electricity in the air, it was such an amazing atmosphere, for one night only no one had a care  in the world.

People were passing food through the window of the car, when this first happened I thought I had to give a donation. The young man looked rather bemused as to why I was trying to give him money on this Holy day. This is a gift he explained. Next we had coconut shells with an unknown warm drink handed to us further along the road. I wondered for a split second just  how  many people had drunk from the same shell that night, I looked at it and thought what the hell,.... bottoms up....Mmm....cinnamon tea ?? 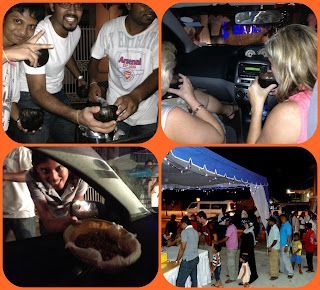 This went on for the next two hours all the way into Colombo.  We marvelled at the lanterns strung up everywhere. Each building trying to out do the one before, it was Christmas on steroids. In Australia we are restricted with occupational health and safety rules that take the fun out of everything, here anything goes.

In the days before Vesak, it wasn't unusual to see men hanging off the side of  5 storey buildings  with one hand, and stringing lanterns up with the other. Wires running from one side of the street, looping over whatever was handy and then coming back again. On work sites here, rubber thongs are the footwear of choice, otherwise bare feet will suffice. No hard hats or overalls, no safety rails, holding onto the scaffolding does the job. 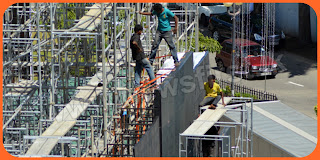 There has been a hole in the road in our street for the past 5 months. When I first drove past someone had thoughtfully broken a twig with flowers and placed it there as a warning to others. As the months have gone by and the wet season arrived the hole continues to grow.

Our friends from Australia asked why they didn't chop the tree down that I was maneuvering the car around one day. "Have a closer look", I said... In Australia, there would be orange cones with flashing  lights and some guy being paid $50 an hour to stand there with a stop sign. The twig that was replaced with a palm frond, which was replaced with a tree branch works just fine. Eventually they will get around to fixing it...no hurry. 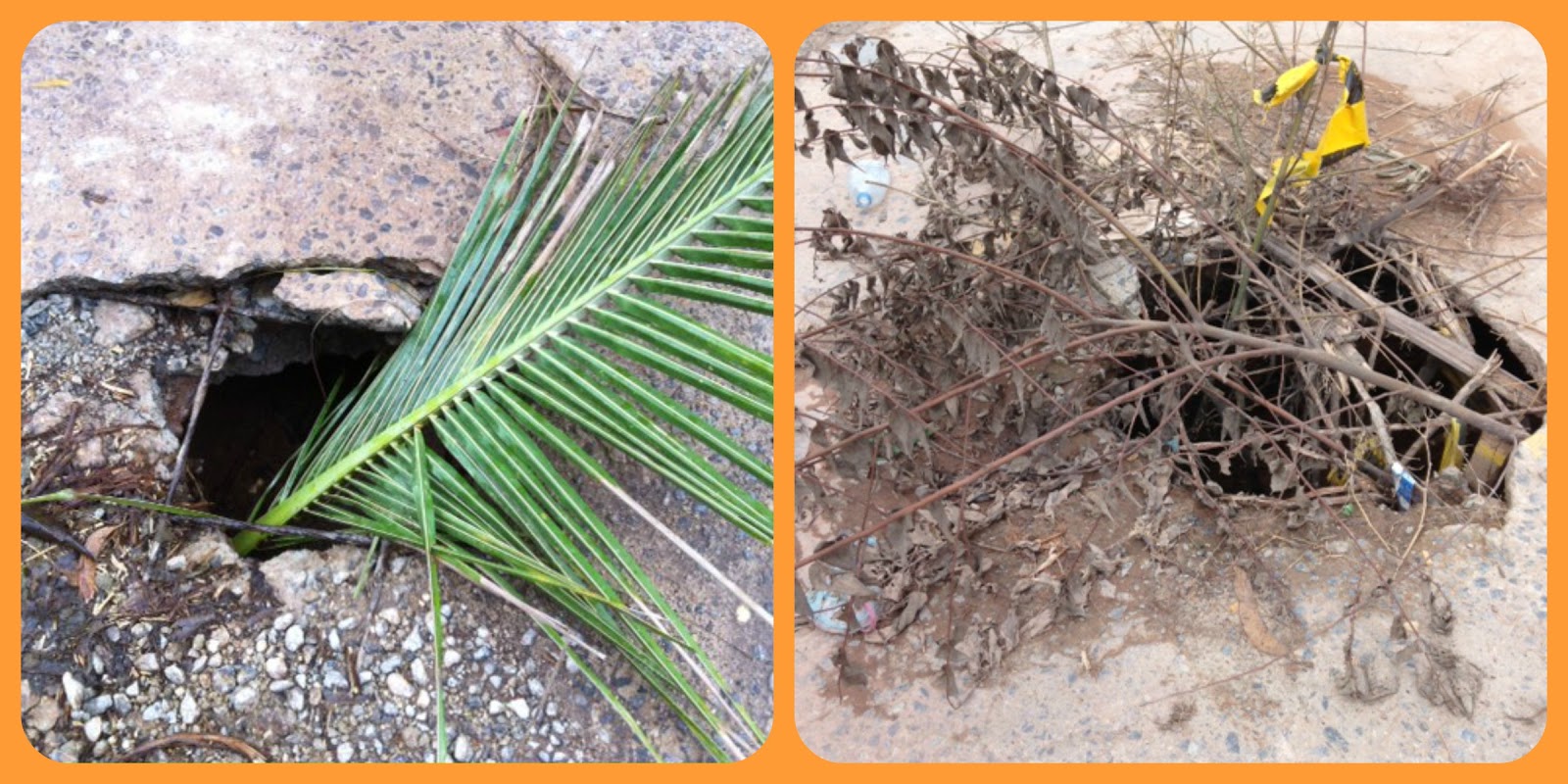 This was my first Vesak.  It was refreshing to see people can give, without expecting something in return. While we in the Western world have continued to develop over the years and gained a better lifestyle, we have lost something along the way. We work incessantly to fill our houses with things we want, but don't need. We shovel food into our mouths causing obesity, and suffer heart attacks  from stress. Our children's role models are reality TV stars, who wouldn't know the real world if it came up and bit them. We look with sadness at the people who have so little yet they manage above everything else to keep their families close.

I was told the trucks filled with people that night, were from the villages and out stations. They come to Colombo once a year to marvel at the sights and sounds of vesak. With just the cost of petrol they come for the weekend, the children get to eat ice cream at the dansalas, they dance to the music at Galleface Green and sleep under the stars on a mat. They have no money but they have a community.

Even though Vesak finished weeks ago now, lanterns are still swinging from peoples front verandahs. Looking a little tattered and tired but still there to remind them of the festive season and the meaning of Buddha.

The wet season has well and truly arrived with rain falling in sheets so thick you can barely see through it. We sit on the terrace in the morning drinking our tea, thankful we can no longer feel the sweat trickling down our back and just enjoying the respite from the heat. It still gets hot  and sticky, especially just before it is about to pour, but the temperature hasn't made it into the 30's for the past few weeks.

We are coming up to the halfway mark for our stay in Sri Lanka, and whilst there have been some challenging moments, there have been more memorable ones. The children are sitting end of year exams and in a fortnight will have a two month break before the new school year commences at the end of august.

We need a revolving door at the front of our house. Over the next few months, we have an endless stream of family and friends coming to stay to experience our new lifestyle first hand, and thats ok I'm looking forward to it.... Maybe I've been enlightened.  I've missed them all. With the idea already being discussed that maybe we will stay  just a little longer than we expected, it's nice to be a little bit Sri Lankan and keep everyone close.
Posted by Catherine Cruse at 2:50 AM