THE LAND OF CONTRAST 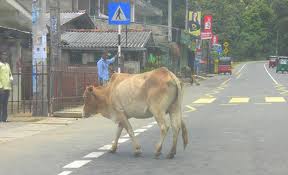 Well, we have now been here for nearly two months. Life has settled down and all the dramas have disappeared. Everything has just become normal, its no longer strange to see a cow wandering down the middle of the road, you just beep the car horn and go around, or to see a motorbike go past with mum, dad and the two kids on it, all happily going about their day. I've even started driving on the weekends.......I was born to drive in Sri Lanka, I can wander all over the road, no indicators, hand on the horn like everyone else. In Australia if you tooted someone, you risk getting the bonnet of your car smashed with a tyre iron, here its one hand on the wheel the other on the horn, but its not an aggressive toot, its more a "look out I'm coming through" or "Hey I'm just going to turn right, from the left lane and cut you off for a second....thanks for slamming on your brakes" kind of toot.

As happens everywhere the bills are now starting to roll in. We received our electricity bill the other day, now everyone had warned us  how expensive electricity was. The man comes and reads the meter, writes the bill and hands it over there and then. Coincidentally David had rung me from Australia only the day before to say our electricity bill had arrived back home...$1900... he almost cried, didn't help that our second daughter had had friends stay  the week before in the spare room and left the air conditioner running non stop for 5 days  before realizing it was still on, plus the fact our children were born with the inability to turn off light switches, so to receive a bill after one month in Sri Lanka for $100,I thought I had hit the jackpot. To be fair we don't have air conditioning here ,the house we live in is quite open and designed to allow airflow, so it's just ceiling fans, which have the added bonus of blowing the mosquitoes away.

It's the same with the mobile, after years with an old Nokia, David finally upgraded me to an iPhone, I was completely against it, didn't want anything to do with it...too complicated I said, now I cant live without it, Google maps alone has been my savior. It's my phone, my music, my bank, my GPS, needless to say the Internet is running as much as the air conditioner that my daughter left on, so with that, and calling Australia every day the bill came in at 90 bucks for the month...David pack your bags and get over here, half our fights have just been eliminated.

The thing with Sri Lanka is the divide, while I'm enjoying the break from having more money going out than coming in, I'm still living on Australian dollars so that makes life good here. There is definitely a higher proportion of middle income earners than when I first came in 1986, but the thing that stands out is the wealthy are now  ridiculously wealthy and the poor are ridiculously poor.

One minute you can be driving down these beautiful boulevards, with century old trees, all the houses have huge white walls around them and you just know there is a magnificent oasis hiding behind. If it wasn't for the three wheeler going past, or the bus that is  packed like sardines, and surely when you think enough is enough they still manage to get another half a dozen, hanging precariously from the open door with one foot on the step, you would think you were driving down Toorak road in Melbourne.

In a span of ten minutes, you can then see shanty's built beside rail tracks, they are so close the occupants only have to lean out the window to shake hands with the commuters on the passing train. The roads here are so narrow you literally have to breathe in to pass a car coming in the other direction, the two drivers have barely a millimetre to spare before their side mirrors touch, but each time they manoeuvre  past without a scratch...and then I exhale.

There are two types of shopping and food outlets as well, there is a wonderful place I get the kids lunch each day for the driver to take to the children at school, I also buy lunch for him, but instead of restaurant food he prefers a rice packet from a lady who sits in the scorching sun for hours, selling her home made produce wrapped in paper by the side of the road for 100 rupees...about 80 cents, and a quarter of the price I pay for the children. When I question if its safe to eat rice and fish that has been in the sun for several hours he assures me " Madam its very tasty, you should  try"...Mmmm that's OK, I just smile and wobble my head.


The supermarkets are just as good as we get in Australia, there are the small local ones such as Keels or Food City or you can go to the newest player on the block Arpico Super centre, they are more like a Cosco. Here I  picked up my weekly groceries plus a queen size mattress, little tricky putting that in the shopping trolley, so I took home the food and for $3 they delivered the mattress. The kids love Arpico, they are more likely to get all the familiar brands from home here, but I prefer to get the fruit and vegetables from the side of the road. You know when you buy fruit in Australia it has been sitting in a cool room for weeks but here it's been picked that morning and it tastes like fruit did when I was a kid.

There are clothing stores set up in old English Mansions, selling the latest fashions at Western prices for the rich, or you can go to tiny stores, with racks all crammed with the same non
-descript shapeless dresses, that have been made with only one function, to cover you up.

You wouldn't come to Sri Lanka for the shopping, like you would in Singapore or Malaysia. You come here for the Beaches, the Hill Country, or just the Culture. However every now and then you can hit the jackpot and find a batch of clothing that was made for export, but some how found it's way into a small local store. I picked up some nice skirts the other day that were bound for Marks and Spencer but ended up in down town Battaramulla instead. 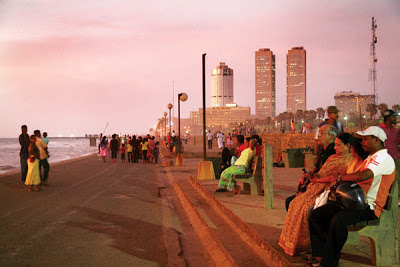 So while the rich get richer and the poor get on boats, life here goes on. Everyone just moving on with life, after 30 years of war. The armed forces have now been put to work building new roads and parks, the road blocks are all gone the streets are being cleaned and new buildings going up. Every night you see families walking along the beach or sitting in parks enjoying the cool night air, playing with their kids, escaping the heat and the confines of their tiny homes. They cant afford to go out for dinner or to the movies ,but they are spending quality time just being together, something that gets lost when you have money...so when you think about it,  maybe we are the poor ones.
Posted by Catherine Cruse at 12:53 AM